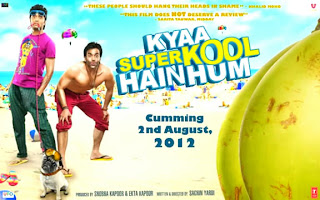 There's a one of statements on poster quoted below:

"This film does NOT deserve a review." – Sarita Tanwar, Midday
Okay, as far as I'm not going to make a review; let me guess some points in this trailer, as i here few dialogues*:
*(All in hindi)

Still, there're much more you'll find in this film. Have fun!